Tokachigawa Onsen Dai-Ichi Hotel faces along the river of Tokachigawa and the Hidaka mountains in the background. The hotel has magnificent view of the Tokachi plains. There are two open-air baths, sauna, Jacuzzi, and 10 types of baths to enjoy. At Tokachigawa Onsen, guests can enjoy canoeing, horseback riding, ballooning and other out door activities. 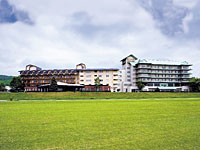