Hotel Keihan Universal City is an official hotel directly tied to Universal Studios Japan. The exterior of the building, which was designed based on a Hollywood art deco motif, is especially distinctive for its blue and yellow tropical color scheme. The interior of this hotel features space for dreams to be played out according to stories found in Hollywood films. All rooms are equipped with communication lines for computers and the use of such lines is permitted free of charge. 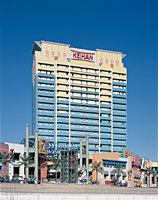 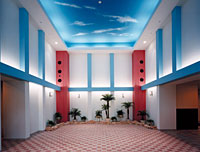